VATICAN CITY (Reuters) - Pope Benedict condemned the trade in human organs as an abomination on Friday and urged caution in removing organs for transplant from dying donors who might not actually yet be dead.

The pontiff told scientists and bioethicists meeting at the Pontifical Academy for Life that the worldwide illegal organ trade often made victims of innocent people, including children.

Buying and selling of human organs is a lucrative business for suppliers and countries that allow foreign "transplant tourists" to have operations they cannot get at home. Organs are often bought from poor peasants and sometimes harvested from condemned prisoners.

Science has helped to better determine the moment of death, he said, and scientists should push to make this even more precise.

"There must not be the slightest suspicion of arbitrariness. Where certainty cannot be achieved, the principle of precaution must prevail," he said.

"Abuses in transplantation and organ trafficking, which often hit innocent people such as children, ... should be decisively condemned as abominations," he said.

Benedict called legal organ donation an act of love and said there were long waiting lists for vital organs to save lives.

A recent article in the Vatican daily L'Osservatore Romano challenged the medical consensus that brain death marks the death of a person. Since the brain can die before other organs, this allows doctors to harvest organs for transplant. 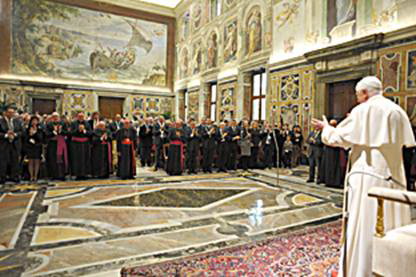 The Vatican article came after the New England Journal of Medicine reported doctors in Denver had taken hearts from 3 brain-damaged infants within 75 to 180 seconds after their cardiac deaths and then successfully implanted and restarted them in other babies.

The Vatican has long accepted the brain death criterion. Rejecting it now could force Catholic hospitals to revert to the cardiac death rule, leaving many fewer organs for transplant.

Rev. Federico Lombardi, the Vatican's chief spokesman, said when the article appeared in September that it did not mean a change in Church policy.